A Nintendo Account will be required to complete your order

The store will not work correctly in the case when cookies are disabled.

Please note: Due to COVID-19 some deliveries may be delayed. We thank you for your patience.

Processing & delivery delays to VIC
Free delivery on orders over $80*

Free shipping for orders above $80

Bayonetta™ 3: Trinity Masquerade Edition includes the standard version of the game, a 200-page artbook, as well as three special game sleeves which combine to form a panoramic artwork.

Skip to the end of the images gallery 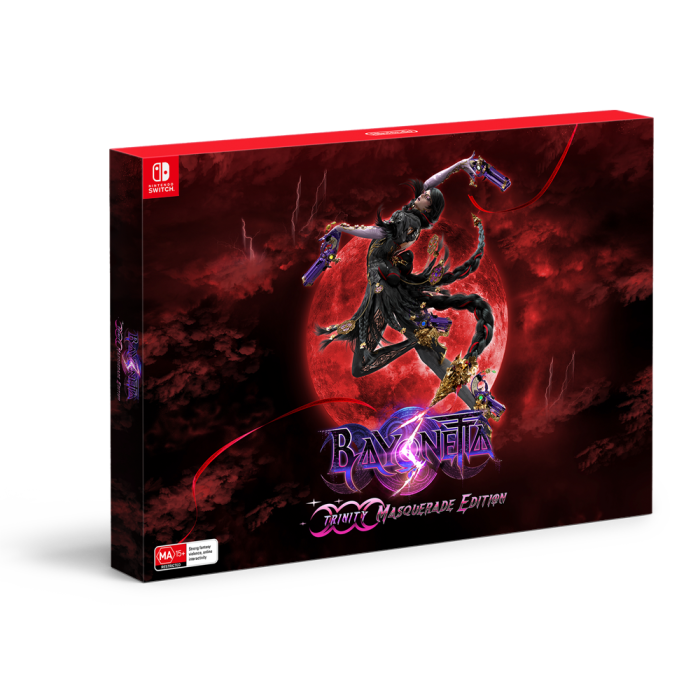 Skip to the beginning of the images gallery
Details

Get ready for a devilishly good time
Tap into Bayonetta’s naughtier side with Demon Masquerade, a new ability that channels the demon linked to her weapon allowing for some exciting action options, not to mention some hair-raising combos. She can also summon her demonic darlings like Gomorrah, Malphas, and Phantasmaraneae during battle, unleashing their demonic powers in the heat of combat and in new, larger-than life battles where you directly control the action.

A bounty of Bayonettas
Fight your way through the streets of Tokyo, the mountains of China, and many other locales! Along the way you’ll meet a virtual coven of Bayonettas, each more fabulous than the last. You’ll also slash and slay as Viola, a feisty witch in training who fights with a sword and a capricious companion, the demon Cheshire. Find out what fate awaits Bayonetta, and if this arcane alliance can really save reality!

No. of players: 1 player